The Twilight Forest mod adds a dimension of the same name to the game.

The Twilight Forest is densely forested and in a perpetual twilight; the normal day-night cycle is suspended. An overstory of larger trees further shades most of the world below. The canopy is pierced only occasionally by massive trees that rise to the ceiling of the world. The terrain is flatter, or at least less mountainous than the Overworld, yet still features occasional hills, sometimes rising far above the canopy level, that are hollow and riddled with caves filled with valuable ores, treasure and dangerous monsters. It also adds dungeons, bosses and a number of items, trees, and mobs. 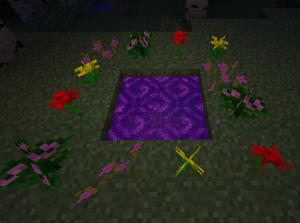 A portal to the twilight forest

Entering the Twilight Forest is achieved through the creation of a Twilight Forest Portal, similar to a Nether Portal. A 2×2 pool of water only 1 block deep forms the basis for this portal; additionally it must be surrounded by any naturally genarated plant. Once the pool is surrounded in this manner, the portal is completed by throwing a diamond into the water. The water will turn purple and a bolt of lightning will strike the portal, inflicting minor damage to nearby Players, who may travel to the Twilight Forest by walking or jumping into the newly created portal.

Once the portal is activated, it is possible to remove the flowers around it while keeping the portal intact.

The majority of the Twilight Forest is a peaceful biome. Despite the perpetually dim conditions, hostile mobs will not spawn on the surface in the Twilight Forest biome itself. Instead, progression through the mod is centered around landmarks that serve to advance the level of difficulty encountered through increasingly challenging enemies and bosses. Chest items and drops become correspondingly more rewarding with each new area.

How to make a portal to the twilight forest.
Categories:
Hidden category:

1 Dec - As part of our 10th Anniversary celebration, the FTB Team is proud to announce the release of FTB Ultimate: Anniver… https://t.co/mSvV7BPTu5
30 Nov - 1.18 Is out! Along with Fabric for 1.18 too, hope you all have fun. :)
30 Nov - Goooooooood afternoon! One day before FTB Ultimate's release, along with 1.18! It's like it's Christmas already. :o
29 Nov - Gooood morning! How much ram do you allocate to modded Minecraft usually?
28 Nov - Modded community, it's your time to shine, give your opinions! https://t.co/DcjKQHmGMa

This page was last modified on 2 September 2021, at 22:18.
Content is available under Creative Commons BY-NC-SA 3.0 unless otherwise noted.