Zombified Piglins (formerly known as Zombie Pigmen) is a vanilla Minecraft creature that lives in the Nether. It will not attack the player unless it or any nearby Zombified Piglin is attacked first. The player should always calculate the risk of attacking, as these mobs do up to 6 hearts of damage (hard difficulty) and have 2 armor points, but will be a good source of gold.

With Nether Ores installed, Zombified Piglins will also attack, when an ore block is broken in their tracking radius. 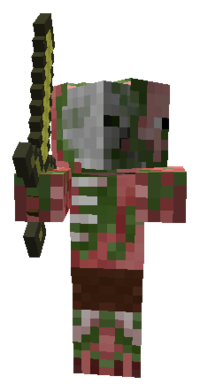 6 Jul - Take your Minecraft skins ready to party with the new "Retro Night" skinpack! Check it out here! ⤵️ Retro Night… https://t.co/D3f0m3vQ3R
3 Jul - Don't you love the glistening of Amethyst? Hex Casting amplifies the power of the crystal and allows you to cast al… https://t.co/bh3YceA0Gs
2 Jul - Something a bit different.. I'm always asking you guys questions about modded MC and how a noob can learn a few t… https://t.co/O97XLds7fx
28 Jun - We have a new partner for you guys! 🥳 Welcome @ectorvynk to the FTB Partner Programme! 👋 You can check his conten… https://t.co/iXFn4NqQu0
25 Jun - I must admit, sticking to vanilla seems like the easy way out... Perhaps vanilla with some sprinkles would be a… https://t.co/wi1QfSPX8r

This page was last modified on 20 October 2020, at 16:06.
Content is available under Creative Commons BY-NC-SA 3.0 unless otherwise noted.