Quicksilver is a material from Thaumcraft 4. Quicksilver is obtained by smelting Cinnabar Ore or by breaking Shimmerleaf. It can also be produced by placing a Mercury Cell in an Industrial Centrifuge. Its primary use in Thaumcraft is being a crafting component for various items. It can also be used as fuel for the Magic Energy Converter producing 8000EU at 24EU/t.

Quicksilver can also be used to craft Mercury Cells in an Automatic Canning Machine, which, when used in an Industrial Grinder, will give full dusts of gold or silver from ores that would normally yield tiny dusts. In addition, processing Gold, Silver, and Sheldonite Ore will yield one extra gold, silver, or platinum dust, respectively. This can effectively be used to extend the raw materials given by ores. 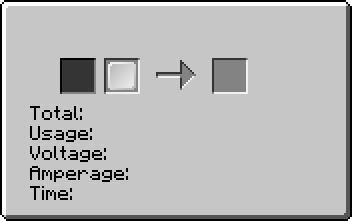 Quicksilver (Thaumcraft 4) can be used to create the following items:
Category:

This page was last modified on 31 January 2020, at 15:11.
Content is available under Creative Commons BY-NC-SA 3.0 unless otherwise noted.