Runic Matrix is a block added by the Thaumcraft 4 mod. Its main purpose is the usage in Infusion Altar construction.

Research aspects in this block[edit]

"Arcane crafting and alchemy can go only so far. Something better is needed to create truly powerful mystical objects.

Infusion crafting is the process of infusing a single object with magical energy and the properties of other objects. You could, for example, infuse a stone with Aer vis and a feather and it would result in a very light stone.

As is usual with thaumaturgy, things are not quite that simple. To even get started with infusion crafting there are several things you need: A Runic Matrix, arcane pedestals and a ready supply of magic in the form of essentia.

Once you have your Runic Matrix properly placed into a structure commonly known as an Infusion Altar, you can begin to craft.

The central pedestal located under the matrix is where the item you wish to infuse will go. You will also need several more pedestals placed around the altar where you can place the blocks and items you wish to infuse into the target object. Lastly you will need warded jars or similar essentia containers holding the requisite amount of vis.

Once all this is gathered you can click on the Runic Matrix with a wand to start the crafting process.

During the first stage of crafting essentia will be drained from nearby sources. Crafting will stall of there is insufficient essentia available - something that you do not want as will be explained on following pages.

Once all the required essentia has been infused into the target object, the other objects will have their essential essence drained. Only when this is done will the crafting process complete.

Infusion crafting is not without risks. The entire process involves forcing vast energies into a single object. Unpredictable things tend to happen.

Usually one of the fusion objects get knocked off a pedestal, or flux gets generated, but more catastrophic events are not unheard of.

The longer crafting continues due to unresolved problems like lack of vis or dropped items, the greater the chance of something bad happening.

These effects can be reduced by various means. Firstly you wish to keep the entire fusion structure as symmetrical as possible - take careful note of where you place pedestals and make sure they are balanced with other pedestals on the opposite side of the altar. When placing fusion items into them you may wish to keep them balanced as well. Lastly you can place occult paraphernalia around the altar in symmetrical formations (things like candles, skulls, crystals, etc.). These will have the effect of reducing instability."

Air Shard (Thaumcraft 4) can be substituted with the following items:

Not enough Vis. But there are more ways. 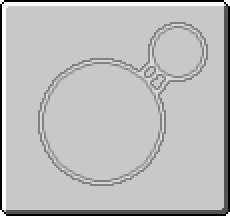 Runic Matrix can be used to create the following items:
Category:

This page was last modified on 20 March 2019, at 19:39.
Content is available under Creative Commons BY-NC-SA 3.0 unless otherwise noted.