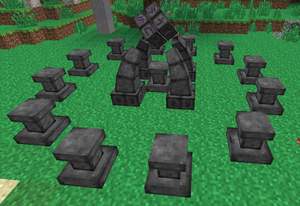 The Infusion Altar is a multiblock structure added by the Thaumcraft 4 mod. It is required to make items obtainable via Infusion.

This page only contains information on how to setup the structure. Information about the usage and automation of this structure can be found at Infusion.

The main part of the Altar consists of the following blocks:

These blocks should be placed in the following pattern:

After construction the structure must be activated with any wand. Activation costs 25

The main part is only enough for placing catalyst and starting the infusion. The ingredients for each recipe should be placed on additional Arcane Pedestals around the main part. The pedestals have to be on the same Y level as the first pedestal and can be in range of 7 blocks around it. It is highly recommended to place 12 pedestals as shown in the picture above. This setup will create the least instability and will allow for all of the recipes to be obtainable.

The Runic Matrix in the center of the main part can see the objects in the area of 5 blocks above and 10 blocks below the Runic Matrix, and 12 blocks each way horizontally, for a total area of 25x25x15 blocks. This area is scanned for symmetry, and for each block in this area there should be the same block (metadata and NBT ignored) opposite of this one (X and Z coordinates should have an opposite offset from the Runic Matrix, Y coordinate should be the same), or the instability of the structure will raise. 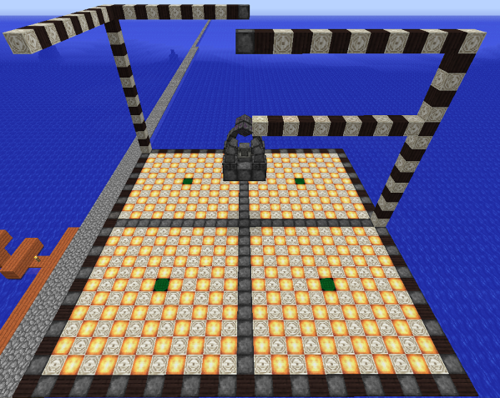 The area checked for (in)stability.

However, the player can also place special items known as Stabilization materials in this area, and as long as they are symmetrical, the instability of the structure will decrease. These items are:

During the infusion process the altar will need to drain Essentia from the containers nearby to infuse the catalyst with it. These containers need to be within 12 blocks of the matrix. The containers are:

This page was last modified on 24 April 2019, at 17:34.
Content is available under Creative Commons BY-NC-SA 3.0 unless otherwise noted.