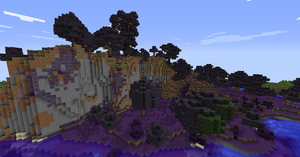 Tainted Lands is a biome added by Thaumcraft 4 mod. It can be commonly found in the Overworld. The following list of blocks, mobs and structures can be found in this biome:

This biome can spread by itself, the speed of the spreading is configurable in the main config file.

This page was last modified on 26 October 2016, at 05:53.
Content is available under Creative Commons BY-NC-SA 3.0 unless otherwise noted.