Standard Binding Agent is a Blood Magic Alchemy reagent. It is used to adding effect for Potion Flasks. 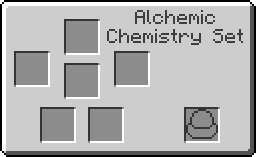 Magician's Blood Orb can be substituted with the following items:

Several effects can be added for one potion, but the more effects a potion has the less chance of success. And in case of failure, the potion will explode. Chances of success are calculated by the formulas: 0,65^X, where X is the number of potion effects before adding a new one.

This is an example recipe. You can use another reagent instead Blaze Powder. See the list of possible reagents on Potion Flask page.

Standard Binding Agent can be used to create the following items:
Category:

This page was last modified on 14 December 2018, at 06:52.
Content is available under Creative Commons BY-NC-SA 3.0 unless otherwise noted.