The Bog Earth is a block added by the Forestry mod. It will produce Peat, which can be used as a fuel source, by leaving it to mature within 2 blocks horizontally of a water source [1]. A single water source [2] will slowly mature Bog Earth into Peat in a 5x5 square around it. Bog Earth are light brown when placed, within 2 game days it will turn dark brown and the name will change to Peat.

Dirt can be substituted with the following items:

Water Can can be substituted with the following items:

Water Cell (Tech Reborn). Any other container filled with Water can be used as well. 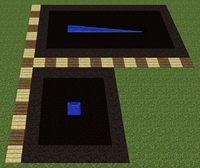 Bog Earth mature into Peat within 2 blocks of a water source even flowing.

When manually farming Bog Earth into Peat, while tools with Efficiency Enchantment seem faster, no particular tool appears to have any given advantage in breaking matured Peat blocks. A peat farm can also be built and maintained automatically by a Peat Bog, while a Turbary takes care of harvesting [3]. In addition to Peat, Dirt is yielded , so only the Sand needs to be replenished [4]. A Peat Bog and an Arboretum work well together, as the Arboretum generates sand as a by-product, while the peat bog generates surplus dirt that the Arboretum use in producing Humus. Furthermore a Peat-fired Engine will produce the Ash used in creating Fertilizer for the Humus.

Bog Earth has no known uses in crafting.

23 Sep - During this difficult time the author of one of the most popular mods has found themselves falling on hard times. F… https://t.co/t454r9edu8
1 Sep - We have learned of an issue on Sky Factory 3. We are looking to release a hotfix shortly to resolve the problem. Th… https://t.co/02S0Oh9TAc
30 Aug - RT @CreeperHost: Time is running out to make use of our fantastic Summer Sale! ☀️ Take advantage of some amazing deals! They're only here…
9 Jul - RT @Direwolf20: Episode 1 of my new let’s play series FTB Interactions is now live! Let me know what you think ;). I’ve recorded just a c…
23 Jun - For anyone that knows of Fabric, a recent DMCA was filed against them, This was filed by someone impersonating a me… https://t.co/jPRY4XwYlY

This page was last modified on 12 April 2020, at 19:14.
Content is available under Creative Commons BY-NC-SA 3.0 unless otherwise noted.