Minecraft Joules (or MJ for short) is a type of energy introduced by BuildCraft. It is generated by machines called Engines and can be used by any kind of BuildCraft machinery. Many types of energy can be converted to MJ by using Engines, however, transforming MJ into other power types is a more complex process, and requires the usage of energy conversion machines found in other mods. MJ can travel through Kinesis Pipes or, before BuildCraft 4, in Conductive Pipes.

MJs are made by all types of Engines. Redstone Engines generate MJ just with a redstone signal, but others like the Combustion Engine need Fuel or other resources to produce MJ. Redstone Engines are used mainly to power Wooden Transport Pipes and Wooden Waterproof Pipe, due to their low outputs, a higher-tier engine is advisable in order to power machinery. 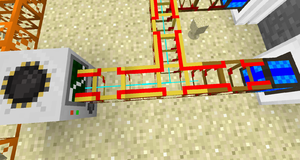 Some Golden Conductive Pipes carrying MJ. The cyan beam in the pipes is MJ.

Thus any power line longer than 10 blocks is more energy efficient if Redstone Energy Conduit is used, while purely from an energy efficiency frame shorter cables are better as Golden Conductive Pipe.

Redstone Flux (RF) is automatically converted into MJ by any Energy Conduit at a rate of 10:1.

Using Power Converters, it is possible to convert each MJ into 10 RF.

Using Transfer Node (Energy) from Extra Utilities, it is possible to convert each MJ into 10 RF.

Using the Universal Cable from Mekanism, it is also possible to achieve a 10:1 conversion ratio.

Using Power Converters it's possible to convert each MJ into 2.43 EU.

Using the Universal Cable from Mekanism, 4RF (0.4MJ) will yield 1EU, meaning a ratio of 1MJ : 2.5EU is achievable.

15 May - Natural Decoration is a simplistic vanilla themed overhaul of nature itself. From flowers on cacti to mushrooms and… https://t.co/xYrJIZynz8
14 May - We have an exciting announcement for you guys.. We're partnered with @MBSTRS 🎉 We're very excited to work with t… https://t.co/qpYZbaZMSj
13 May - RT @Direwolf20: Official Announcement: The @FTB_Team has released the Direwolf20 pack for version 1.18.2 The first episode of my let’s p…
13 May - RT @CreeperHost: The @FTB_Team Presents @Direwolf20 pack has just been released! We have a limited time ⏰ discount 💸available for the laun…
13 May - FTB Presents @Direwolf20 1.18 is now released! 🎉 Check out the mod list and pack information here ⤵️… https://t.co/kyNvgN2C6P

This page was last modified on 13 July 2018, at 15:17.
Content is available under Creative Commons BY-NC-SA 3.0 unless otherwise noted.