The Quarry is a block added by the BuildCraft mod.

A machine that is used to automatically mine out large areas. By default, it will mine a 9×9 area of land down to bedrock, given enough time and energy in the form of Redstone Flux. The default area to be mined can be altered by defining a rectangle or cuboid area using Land Marks and placing the Quarry on an outside corner next to one of the Land Marks. Black and yellow guidelines will appear showing the area it will be working on.

When first powered, the Quarry will spawn a floating robot that destroys any blocks within the defined area to clear for the support scaffolding. It then forms a structure of Quarry Frames that will guide the laser drill. The Quarry will keep the chunks that it is mining on loaded in memory even if unpowered, thus it doesn't require a Chunk Loader or the Player present. 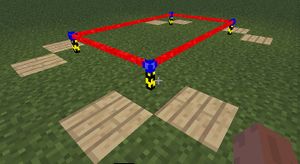 Quarry must be placed outside of the area, i.e. on any of the wood blocks

Land Marks can be used to define an operating area for the Quarry. The area can be expanded to a maximum of 64 x 64 blocks with 3 Land Marks or shrunk to a minimum of 3 x 3. It is also possible to change the height of the frame using a fourth Land Mark placed above the corner one, although heights lower than 5 blocks will be ignored. It is also possible to define an area larger than 64 x 64 by placing multiple Land Marks in line, because each one has a range of 64 blocks. There is however a certain limit, at which the Quarry will say that the area is outside of chunk loading bounds. The video below (in the video section) explains the process (including changing the configuration files)

Once the area has been defined, all Land Marks activated by right-clicking and red lasers between them form a rectangle or cuboid, the Quarry can be placed next to any Land Mark. It will drop all Land Marks, create a black and yellow outline of the mining area and a floating robot will start clearing the area and constructing the frame and drill.

The Quarry requires MJ energy to work and has a internal buffer of 15,000 MJ. Its speed varies by how much energy (MJ/t) is provided, but efficiency decreases with increased energy supply. The maximum energy consumption varies depending on the presence of GregTech 4 and the base game version:

As of recent BuildCraft a minimum of 4 MJ/t is needed and at least 8 MJ/t is recommended for proper functioning.

The Quarry powered with 2 to 4 High Pressure Boilers fueled with Charcoal connected to 1 to 2 Steam Dynamo or a single Steam Turbine would be sufficient, yet a larger power source via Tesseract more efficient and portable. 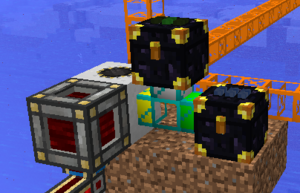 The Quarry will dig through Water but will go around Lava; the best way to avoid this is to either have a lake in the mining area or to manually place water in the Quarry pit. This will turn all Lava into Cobblestone, Stone or Obsidian, allowing the Quarry to continue mining. Alternately, mining in the ocean has three advantages of fewer soil levels to clear, existing Water blocks to clear Lava and Clay if you are mining in a lake or a ocean.

A Quarry will break almost any type of block in its way, including Chests, Spawners, Beehives and ores. The drill will pick up loose items that it passes over, similar to an Obsidian Transport Pipe. The main disadvantage of a Quarry is that it cannot carry enchantments such as Fortune or Silk Touch.

Blocks or items mined or picked up by the Quarry are expelled from it immediately, unless a Transport Pipe or inventory is located next to it. In this case the Quarry will place the items into the pipe or inventory instead. A combination of a Diamond Transport Pipe for sorting, Void Transport Pipe for deleting unwanted blocks, and an Ender Chest or Item Tesseract is commonly used to carry the output of a Quarry to a base or storage system. A system that automatically empties the Ender Chest is necessary to keep it from quickly overflowing with the Quarry's output.

This page was last modified on 8 February 2020, at 15:17.
Content is available under Creative Commons BY-NC-SA 3.0 unless otherwise noted.