Transport Pipes are a fundamental part of BuildCraft, and once set up allow items to be transported around the world without the player being required to carry them. Pipes can be crafted to carry items, liquids, and Buildcraft power, and are capable of connecting to blocks such as furnaces and chests to extract or insert items.

Several other mods have added their own buildcraft-compatible pipes, too.

The pattern for the basic buildcraft pipes is always the same: two of the respective material surrounding a glass block, resulting in 8 pipes of that type. 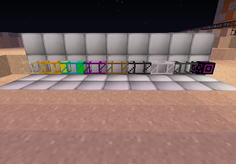 Cobblestone pipes carry items along the pipe network. They will not connect to stone pipes or quartz pipes.

Stone pipes carry items along the pipe network. They will not connect to cobblestone pipes or quartz pipes. They will also continue the speed effects of gold pipes more efficiently than others.

Quartz pipes carry items along the pipe network. They will not connect to cobblestone pipes or stone pipes. Items sped up with gold pipes will also stay sped up for twice as long as they would in stone pipes.

Iron pipes combine streams of items into a single output. The side of the single output can be changed with redstone or a wrench. Iron Pipes can't output into a wooden pipe.
Can also act as a connector between Cobble and Stone pipes, allowing them to intersect.

Golden Transport Pipes boost the speed of items passing through them.
(requires redstone signal pre BC3.2)
Can also act as a connector between Cobble and Stone pipes, allowing them to intersect.

Diamond Transport Pipes can filter items to different output pipes based on a user-defined filter. Diamond pipes are the opposite of Iron Pipes.

Obsidian Transport Pipes will pick up items off the ground. Their collection range will increase when powered by an engine.

Sandstone pipes connect to other kinds of transport pipes, allowing stone and cobblestone pipes to connect, but will not connect to machines.

Available in BC 3.2.0 (for MC 1.3.2)
The void transport pipe simply deletes any item entering it. It is less CPU-intensive ( And more safe for your player! ) than dropping items into lava.

Emerald Pipes are advanced versions of the Wooden Pipes. The pipe possess a filter that pulls items from inventories in a blocking Round Robin fashion.

Lapis pipes can assign 1 of 16 colors to items passing through it, similar to RedPower 2's Sorting Machine. You will also need a Daizuli Transport Pipe in order to actually split up the items by color.

Daizuli pipes can filter items by colors that are assigned by a Lazuli Transport Pipe.
With Daizuli Pipes, you set it's accepted color and output side, and it will let only that color items pass through that side. All other items are spit back out another side.

Insertion pipes try to insert into connected inventories first. (In contrast to the usual behaviour of distributing items randomly between connected items and pipes.)

A Clay Transport Pipe should be positioned next to an inventory. Items will only be inserted into the inventory if there is room; otherwise items pass along the pipe network, to prevent the spilling of items onto the floor.

Stripes Pipes attempt to use the item passed through them on the block in front of them (e.g. placing a block, using a tool).

Redstone pipes send out a redstone signal while there are items inside it.

Much like the Thermal Expansion Transport Pipe, this pipe attempts to insert resources into the closest non-full inventory.

The RoundRobin Transport Pipe will switch its output route after an item transfers through it, ensuring an even distribution of resources.

A Crossover Pipe will send items straight forward when multiple pipes cross - being a single block replacement for otherwise difficult routing junctions. If there is no straight path, the default random behaviour will take over.

The Compactor Pipe will compact multiple items passing through it into stacks of 16 when possible, instead of having them pass through one at a time.

Fluid pipes can carry BuildCraft-compatible liquids around. They require pipe sealant in their construction.

Kinesis pipes can carry Buildcraft power (MJ) from Engines to machines (e.g. quarry , oil refinery, etc). They will not carry items or liquids.
In Buildcraft 3 a loop of conductive pipes will accumulate power, making the loop explode after some time. From Buildcraft 4 and on no pipes will explode however all Kinesis Pipes are restricted to a certain amount of power travelling through the pipe at a time. More expensives pipes have a higher power limit than cheaper pipes.

Cobblestone structure pipes can not carry items, but can support pipe wire and Gates. This allows you to attach sensors and information lines to a piping system without having items travel into dead ends.
Structure pipes also can support decorative Facades.

Facades are decorative covers for pipes that are available with a vast choice of textures. They don't block connectivity or take additional space. Using them it's possible to completely hide a pipe inside of what seems to be regular block on the outside.

Gates are sensors that can be attached to pipes. Gates are able to read the status of the pipe, adjacent inventories and adjacent machines.
Depending on the type and quality of a Gate it can output redstone signal, pipe wire signal or act like a redstone engine (when attached to a wooden or emerald pipe).

15 May - Natural Decoration is a simplistic vanilla themed overhaul of nature itself. From flowers on cacti to mushrooms and… https://t.co/xYrJIZynz8
14 May - We have an exciting announcement for you guys.. We're partnered with @MBSTRS 🎉 We're very excited to work with t… https://t.co/qpYZbaZMSj
13 May - RT @Direwolf20: Official Announcement: The @FTB_Team has released the Direwolf20 pack for version 1.18.2 The first episode of my let’s p…
13 May - RT @CreeperHost: The @FTB_Team Presents @Direwolf20 pack has just been released! We have a limited time ⏰ discount 💸available for the laun…
13 May - FTB Presents @Direwolf20 1.18 is now released! 🎉 Check out the mod list and pack information here ⤵️… https://t.co/kyNvgN2C6P

This page was last modified on 12 September 2016, at 11:46.
Content is available under Creative Commons BY-NC-SA 3.0 unless otherwise noted.