The Pump is used to collect liquid, such as Oil, Water and lava, and transport it into tanks or directly into Combustion Engines. They were first introduced in BuildCraft version 2.2.0. They are able to move any BuildCraft compatible liquid in Feed The Beast.

When pumping directly into a tank or machine without the use of pipes the Pump can work as fast as 1 bucket/tick. This can quickly draw all water from an 'infinite' pool. If you want to use the pump as an infinite water source make sure water is able to regenerate faster than the Pump is draining it. Alternatively you can use an Aqueous Accumulator to make an infinite source of water.

A Pump requires a Stirling Engine or better to work properly. It will work with a Redstone Engine at a reduced rate. It is the only machine that can be powered directly by a single Redstone Engine. Note when using a Combustion Engine, the engine should be separated from the liquid by Kinesis Pipe or else it will feed the liquid directly into itself for fueling/cooling. No Wooden Fluid Pipe is need to receive liquid from the Pump. It will send the liquid it collects straight through any Fluid Pipes connected to it.

The Pump actually takes from more than just directly around it (A pump can draw from a 64 block radius), so when pumping oil that is surrounded by water, it is wise to have two tanks, (one for oil, one for water) or the water will get stuck in the pipe and no more oil will be able to be pumped.

Another method of separating the water and oil involves building a wall of gravel/sand. Use a Lily Pad to drop sand/gravel AROUND the main oil spout, cutting off the water. This method is perhaps best for oil deposits at sea as without doing so the pump will extract a very large quantity of water (likely filling any secondary water tanks, stopping oil extraction) and leave a big hole in the sea.

In Buildcraft 4.0+ it is no longer required to separate the water from the oill, if the pump is placed at the top of the spout the pump will ignore the water and only pump the oil allowing you to pump all of the oil available very easily.

A single pipe won't hold the load of a maxed out pump, nor will 4 Golden Fluid Pipes as they all provide 4x1.6=6.4 buckets / sec, a little more than a third of the capacity needed. Therefore it is advised to place a tank directly next to the pump.

To have this type of pump run at its maximum speed use Liquid Tesseracts instead of pipes and use Redstone Energy Cells instead of engines. This allows for 20 scoops per second.

Placing a pump above a natural ocean or river will eventually cause it to empty. This happens because a pump will draw water from a random location between 32 and 64 blocks away (unconfirmed exact number), and this particular water block may not replenish itself. Eventually, that entire layer of water will be drained and the pump will go down to the next layer and begin again. However, drainage of an entire layer is not very likely, because the oceans and rivers can stretch over several chunks. In addition, oceans can be 30 blocks deep; if you're using an ocean as a water source, it'll take a while to drain, giving you lots of water supply.

As of Minecraft 1.5.2, BC3 pumps are no longer capable of draining reservoirs of even a small size. Water source blocks now propagate without requiring a layer of solid material beneath them. 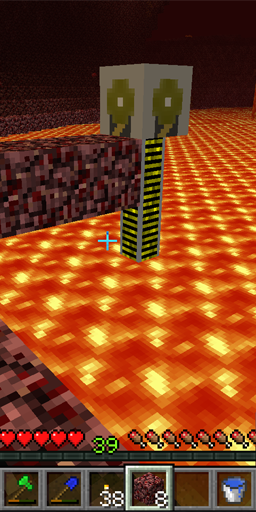 The pump lowering its internal pipe down to the lava lake. -Nether
Draining lava, like any liquid, requires the positioning of a pump above the liquid surface.  Because of how the pump works, you do not have to supply pipe down to the surface of the liquid.  The pump will lower its own yellow and black jacketed pipe down to the bottom of the lake bed. From here, supply MJ to the device and place tanks nearby.

NOTE: If you want to move Lava from the nether to the over world, do not use Liquid Tesseracts. Instead, use the lesser known Ender Tanks, which are significantly cheaper and easier to manufacture.

Remember that Lava does not replenish and, especially in the Nether, will flow from source blocks into newly cleared territory.

Place a pump above a 3 x 3 x 1 deep pool of water for infinite water. The pump must go above one of the four corners of this pool and can be powered by any set of engines you like - the pool will refill itself faster than it will drain, even at maximum pumping speed to empty Gold Fluid Pipes.

A 2 x 2 x 1 deep pool will not work, as the pump will occasionally remove more water than the pool can generate. Larger non-square pools will run out as the pump will eventually take water from a block that won't refill itself properly, and this cycle will repeat until the pool is empty.

Pumps will not take water from unconnected sources. Make sure two sources of water are not connected nor touching diagonally to prevent remote-drainage.

It is recommended to use an Aqueous Accumulator to get infinite water.

1 Pump with 1 Combustion Engine hooked up can provide 16 Combustion Engines 24/7 with water without overheating the Combustion Engines, though due to the increased rate the pump extracts source blocks it may occasionally drain the infinite water source. It may therefore be preferable to use more pumps over separate water bodies.

This article contains material from the "Pump " article on the MinecraftBuildCraft wiki.

This page was last modified on 20 July 2021, at 10:38.
Content is available under Creative Commons BY-NC-SA 3.0 unless otherwise noted.