The Chunk Loader is a block added by the ChickenChunks mod. It is used to keep a given area of Chunks constantly loaded into memory, allowing for the game's processes to go on, regardless if a Player is present or not. A Redstone signal will deactivate the Loader, shown by the orb coming to a rest. It is important to always verify the coverage of the area loaded, using the Show Lasers feature, as some machines may operate in unintended ways if not loaded properly. 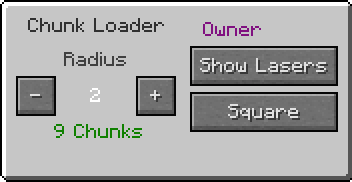 Right-click the Chunk Loader to open the GUI [1], that allows access to the options and features:

The diameter of the area is calculated with the formula:

Server Admins have several config options to limit or alter the behaviour of the Chunk Loader. Limit can be set to Players, to dimensions and/ or globally.

Chunk Loader (ChickenChunks) can be used to create the following items:

This page was last modified on 16 November 2019, at 08:30.
Content is available under Creative Commons BY-NC-SA 3.0 unless otherwise noted.