The Signalum Security Lock is a crafting component added by Thermal Expansion. It is used for adding access control to Thermal Expansion 4 machines and containers, such as Satchels and Dynamos. This allows for extra security in modded servers, preventing other players from stealing inventory or resources such as stored energy. 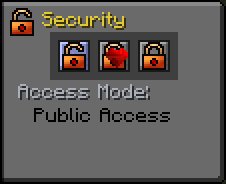 The security tab as found on an Enervation Dynamo

When a compatible block or item is right clicked with a Signalum Security Lock, it will gain a new "Owner" field and a new tab in its GUI. The player who places the block or opens the item will become its owner. This allows them to change the access level of the item. There are three access levels:

When the respective configuration option for CoFH Core is enabled, ops on multiplayer servers are able to access blocks and items that would normally be inaccessible to them. A second option is available to notify players of ops accessing their items without permission.

The following items can have security added on to them:

This page was last modified on 5 December 2019, at 19:16.
Content is available under Creative Commons BY-NC-SA 3.0 unless otherwise noted.