The Railcraft Tank is an expandable multi-block structure that holds a large amount of liquid. Valid dimensions are 3x3, 5x5, 7x7 or 9x9, from 4 up to 8 blocks tall. Railcraft Tank blocks may be crafted from Iron or Steel. Iron tanks are made of Iron Tank Walls, Iron Tank Gauges and Iron Tank Valves, and can hold 16,000 millibuckets of liquid for each block in the structure. Steel tanks are constructed from Steel Tank Walls, Steel Tank Gauges, and Steel Tank Valves, and can hold 32,000 mB. Steel Tanks are thus much more efficient, but Steel is harder to obtain and requires a Blast Furnace. 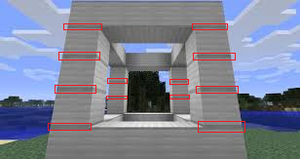 The frame of a Railcraft Tank made of Wall Blocks

The frame of a Railcraft Tank must be constructed of Tank Wall blocks. The inside must be empty and the walls may be filled in with any of the tank blocks. Gauges are transparent blocks that allow players to see a visual representation of the tank's liquid level. Valves allow the tank to interact with other machines, Fluid Pipes, and Liquiducts. The tank will form into a single structure once all the outer walls are complete, and nothing is inside, including players, blocks and floating entities.

Liquid is pumped into and out of the Railcraft Tank through a Tank Valve, using pipes, tubes, or other machines with powered liquid outputs (such as the Aqueous Accumulator). Liquid can be pumped in from any valve on the sides or the top, while extracting all liquid from a tank requires it to be drawn from a valve installed on one of the bottom 2 rows (if a valve is installed higher the tank will not empty completely). Valves installed on the underside of the tank will automatically output liquid into a connected pipe or container. The contents of Buckets, Cells, Glass Bottles, Tin Cans and other liquid containers can be added by dropping them into the top right side of the UI. However all containers but Buckets will be destroyed. Furthermore, simply 'Right-clicking' a Tank with an empty Bucket or liquid container will fill it (if there is enough liquid in the tank), with a full container, the liquid will transfer to the tank.

The bottom center block of the structure stores the record of the tank's contents; it may not be removed and has to remain in the center. Railcraft Tanks can be mostly dismantled, rebuilt, or built to a different size as long as the center block remains. Breaking and replacing any other block doesn't affect the contents, although inaccessible until the structure is valid again. To relocate a Tank it is recommended to empty it first.

The following tables lists the capacity of the various tank sizes in units of buckets.

The following table lists the total amount of blocks required to build the various size tanks.

The following table lists the cost efficiency of the various tank sizes (in B/BlocksRequired) - for Steel Tanks, double the values.

Tanks may be colored by placing eight blocks of the same type around any vanilla dye in the crafting table, or by right-clicking on a block in the world with an IndustrialCraft 2 painter. All blocks in a single tank need not be the same color. Breaking a tank block removes its color.

This page was last modified on 8 December 2018, at 16:21.
Content is available under Creative Commons BY-NC-SA 3.0 unless otherwise noted.