The Tunnel Bore is a part of the Railcraft mod. When given a Bore Head, any Vanilla or RailCraft item that can function as fuel in a furnace (though Coal Coke is ideal), Rails, and Gravel (optional), the bore will dig through blocks, place rails, and place gravel to create a surface for rails if it comes across holes. Carts can be attached to the rear of the bore by using a Crowbar, therefore Chest Carts can be attached to the bore for the mined blocks to be stored, and Anchor Carts to keep the bore digging even when chunks aren't loaded. The Tunnel Bore can also automatically extract Coal Coke, Rails and Gravel rapidly from the carts. If there are no carts linked to it, it will drop the items it has mined onto the ground, unless it is gravel (as long as it has space for it). The Tunnel Bore can dig a 3x3 space in front of it and can hold its bore head, 9 stacks of Tracks, 9 stacks of Gravel (called 'Ballast' in its GUI) and 6 stacks of Coal Coke. It cannot take Bore Heads from Chest Carts though. The Bore is approximately 7 blocks long by 3 blocks wide by 3 blocks high. The large square end is the front which bores through with the smaller end being the rear. 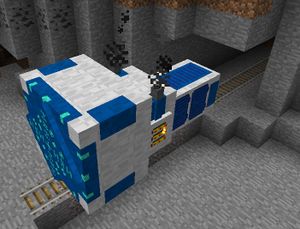 The Tunnel Bore will stop mining if Water or Lava is 2 blocks ahead of the Bore. If Water does reach the Bore though, it will wash away its Tracks, and if Lava makes contact with it, it will destroy the Bore. Although giving it Gravel will make it fill in gaps, if the gap is too big it will stop without trying to fill it. When the Tunnel Bore is left-clicked, it will be destroyed in the same fashion as a Minecart in Survival, Creative and Adventure modes.

There is a bug where The Tunnel Bore despawns and turns into an item on servers and lan worlds.

Tunnel Bore has no known uses in crafting.

This page was last modified on 28 June 2020, at 03:31.
Content is available under Creative Commons BY-NC-SA 3.0 unless otherwise noted.