The Ender-Lily Seeds is an item added by the Extra Utilities mod. The seeds will grow into Ender Lilies when planted. Ender-Lily Seeds are found in Dungeon chests (8.1% chance) or obtained from harvesting Ender-Lily plants in the End dimension. These plants are a source of Ender Pearl. 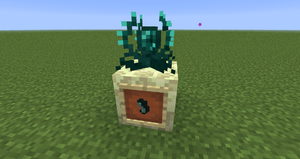 This page was last modified on 22 July 2019, at 11:32.
Content is available under Creative Commons BY-NC-SA 3.0 unless otherwise noted.