The Ender-Thermic Pump is a machine block added by Extra Utilities. A low-lag liquid pump designed specifically for lava in the Nether. When it pumps up a lava source block, it instantly replaces it with a Stone block and doesn't cause a block-update. It also acts as a chunk-loader, keeping itself and the bare minimum of chunks loaded in order to pump lava while preventing lighting glitches. It doesn't eliminate lag entirely (because of the Nether environment getting loaded alongside Overworld) but it minimizes the effect compared to other solutions. Mechanically, it functions exactly the same as a Pump in terms of power and output. The only major difference is that it must be placed just above the surface level of the lava lake but doesn't need to be directly placed over the lava itself. The Ender-thermal Pump is able to pump lava through solid blocks below it. 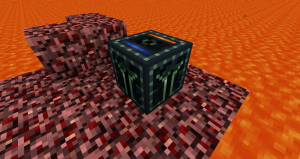 An Ender-Thermic Pump in the nether. 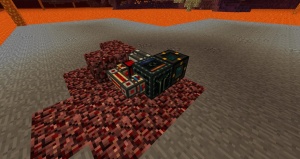 A viable solution for pumping lava.

Ender-Thermic Pump can be used to create the following items:

This page was last modified on 16 October 2016, at 13:23.
Content is available under Creative Commons BY-NC-SA 3.0 unless otherwise noted.