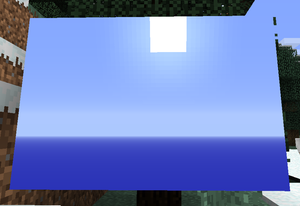 The sky viewed through some Sky Block blocks.

The Sky Block is a block added by the OpenBlocks mod. When placed in the world, it will look like a gray block with a smokey dynamic texture. After a redstone signal has been applied, it turns into a viewport to the sky (on all sides). When looking at the sky through this block, clouds will not be rendered, only the sky itself, the sun, moon and stars. An inverted version which is deactivated when a redstone signal is applied is also available as the Inverted Sky Block.

Sky Block can be used to create the following items:

This page was last modified on 12 July 2019, at 06:56.
Content is available under Creative Commons BY-NC-SA 3.0 unless otherwise noted.