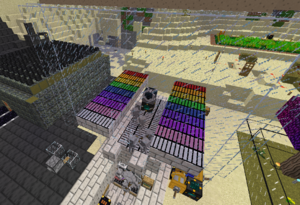 Conveyor Belts being used with an Auto-Spawner in a Skeleton mob farm.

Conveyor Belts are used in MineFactory Reloaded as a means of transporting items, mobs, and even players.

When used with items and machines, it is similar to transport systems from other mods, such as BuildCraft Pipes, Factorization Routers, or Applied Energistics Import Bus and Export Bus. The Precision Sledgehammer or the OmniWrench can be used to modify the direction of the conveyor belt including diagonal vertical movement (e.g. creating escalators).

One important aspect of Conveyor Belts is that anything being transported on it will stick to the belt, including when intersecting belts that turn, but will fall off if the belt ends abruptly at a vertical fall. This makes them extremely useful when setting up mob farms, especially when combined with an Auto-Spawner or Soul Cage and a Grinder.

To move items from a conveyor belt into a chest, the Item Collector is needed. Lastly, Conveyor Belts can also be dyed with Ceramic Dye.

Conveyor Belts can be sped up by right clicking on them with Glowstone Dust.

Conveyor Belts will not move the player if they are wearing Plastic Boots.

Conveyor Belt (MineFactory Reloaded) has no known uses in crafting.

This page was last modified on 9 June 2019, at 19:24.
Content is available under Creative Commons BY-NC-SA 3.0 unless otherwise noted.