The Rubber Sapling is a block added by the MineFactory Reloaded mod.

It can be found in Dungeon Chests and obtained from harvesting the leaves of a Rubber Tree, which it will grow if planted. the tree grows best in swamp areas, but can also be found in other biomes. The Rubber tree can be harvested for Rubber, which drops along with Rubber Wood at about the same rate, which can be increased using an Axe imbued with the Fortune enchant. The Rubber can be smelted into a Rubber Bar, a useful resource.

The Sacred Rubber Tree is similar to the regular Rubber Tree, except that it grows significantly larger, about eighteen chunks large and it has been said that the only way to fully grasp the size is to make a creative world and see for yourself.

The entire tree can actually be cut down using a Harvester, although it would take a long time. Blazing Pyrotheum is effective for removing large parts of it, although this and other methods of mass removing the tree (VeinMiner, treecapitator) may cause severe lag or even crash the game due to its sheer size.

This sapling can be obtained by Jungle generated structures' chests. Using bone meal on a regular rubber tree sapling appears to convert it into a sacred sapling but it is just a graphical glitch. 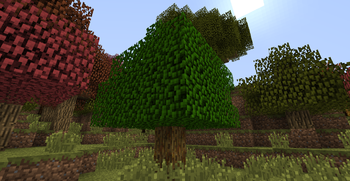 A Rubber Wood tree in its natural environment

Rubber Sapling has no known uses in crafting.

This page was last modified on 11 March 2019, at 11:39.
Content is available under Creative Commons BY-NC-SA 3.0 unless otherwise noted.