The Steam Hammer is a machine by Professor Flaxbeard's Wondrous Steam Power Mod. It is used together with Anvils and allows the player to repair and rename items using Steam instead of experience.

A Steam Hammer has to be placed exactly above the Anvil block. A Pipe has to deliver Steam to the Hammer. The Steam Hammer will start working automatically as long as it has a task to do. The Steam Hammer's GUI is equal to Anvil's GUI, but instead of requiring XP levels, the Hammer will just show the progress if the Steam supply is steady. Taking the item before the task is complete will reset the progress. A Valve Pipe can be used to turn the Hammer on and off by blocking Steam flow.

The Steam Hammer will perform one cycle for every XP level that would normally be used. Each cycle performed uses 400 Steam Units.

Note: as the Steam Hammer and Anvil basically share one GUI, it is possible to mix them up. Right-clicking a Hammer itself will open the proper GUI, right-clicking the Anvil will open the vanilla Anvil interface. The user can easily notice this as the items would pop out of the anvil as soon as its GUI is closed. Items placed via the Steam Hammer's interface are kept inside and are shown on the anvil block. 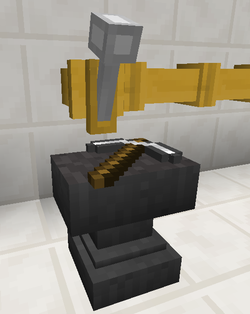 This page was last modified on 19 May 2016, at 05:02.
Content is available under Creative Commons BY-NC-SA 3.0 unless otherwise noted.