The Ritual of Draconic Resurrection is a ritual that can be performed with the Draconic Evolution mod. It is used to resurrect the Ender Dragon after it has previously been slain by the player. This is very useful to obtain additional Dragon Hearts. 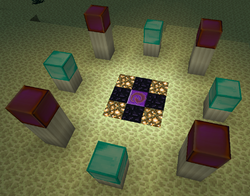 A possible configuration of the ritual setup.

The ritual has to be set up by placing the resurrection stone surrounded by Obsidian, with Glowstone blocks in the corners, 1 block down in the ground. Next it has to be surrounded with 4 pillars made out of 1 Pillar Quartz Block and 1 Diamond Block, as well as 4 pillars made out of 2 Pillar Quartz Blocks and 1 Charged Draconium Block. These pillars have to be placed at a maximum range of 5 blocks from the Resurrection Stone. Placing the pillars in a symmetrical pattern will make it look nicer, but is not required. It is important that the ritual be set up within 150 blocks from the 0,0 coordinate of the world.

The ritual during its execution.

While the ritual is being executed, a lot of lightning will strike the ground and also frequently hit the pillars of the ritual. Particle effects will show the ritual creating a sphere of energy over the Resurrection Stone. This sphere will eventually fly up into the sky and spawn the Ender Dragon. Before this happens, all of the End Crystals[1] will regenerate. At the end of the ritual, it will cause a large explosion, destroying every block used in the ritual, except for the obsidian blocks, as well as possibly some of the surrounding blocks. Any mobs or players who are too close to the explosion will likely perish.

The new Ender Dragon which is spawned has a different texture than the original. It is also harder to kill than the original and the difficulty increases every time the ritual is performed by the player. The increase does stop at some point when the maximum difficulty has been achieved. When the new Ender Dragon is killed, it will drop the same items as the original did, but it does not generate a new or extra End Portal. A Dragon Egg is also dropped, at the position where the original one was dropped, this can be on top of the previous one if it wasn't removed. The dragon is given a 25 second Regeneration effect right after spawning, but this is not renewed after it expires.

This page was last modified on 28 August 2020, at 04:59.
Content is available under Creative Commons BY-NC-SA 3.0 unless otherwise noted.