The Energy Storage Multiblock is a multiblock power generation structure added by the mod Draconic Evolution. It uses Draconium and Redstone blocks power to store immense amounts of Redstone Flux, up to 2.14 TRF (unlimited in new versions of the mod).

For tiers 1 to 4, 4 Particle Generators are replaced with 4 Energy Core Stabilizers. For tiers 5 & above, 36 Stabilizers are needed.

The Energy Storage Multiblock consists of Energy Core at the center surrounded by 4 particle generators that must be directly in line with the core and be placed no longer than 10 blocks from the Core. The core is then surrounded with Redstone and Draconium blocks. Allowed setups are shown at the right: 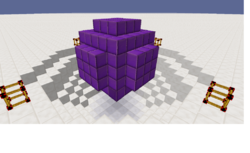 To activate the core shift right-click one of the Particle Generators with empty hand. To add and remove energy from the Core energy pylons have to be placed within 15 blocks of the core. The pylons are activated by placing glass block under or above it depending on whether pylon was placed under or above the core (if pylon was placed above the core the glass must be placed under the pylon). By default pylons only send energy. To toggle it right-click the sphere above pylon. If a pylon is placed near more than 1 core shift right-click it to change the core it's linked to.

This page was last modified on 30 June 2020, at 22:24.
Content is available under Creative Commons BY-NC-SA 3.0 unless otherwise noted.