The Portal Gun is an item which replicates the behavior of the Portal Gun from the Valve game series Portal. It connects two different points in space, allowing for instant transportation between them.

The Portal Gun item works in the same way as it does in the Portal game series. Left-click and right-click will produce a portal of the corresponding color, and pressing R will close all portals. The basic Portal Gun fires a blue and an orange portal. A portal is 2 blocks tall by 1 block wide. It can be placed on any non-transparent surface so long as there is space for it. The outline of the portal can be seen through blocks when the portal gun is held in-hand.

All same-type Portal Guns share the same two portals. One Portal Gun can change the position of a portal fired by another Portal Gun. 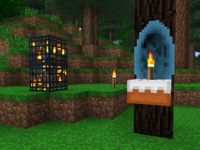 A screenshot showing two moved spawners and the birthday cake

The Portal Gun can pick up any solid block or mob by pointing at it and pressing G. The thing being picked up becomes an entity. Pressing G again will place the thing down. This includes spawners, beehives, and rubber tree (including the sap hole); blocks which otherwise cannot be moved. This does not include most machines, warded glass, and non-solid blocks such as torches and flowers.

Entities can move freely through portals, including entities being picked up by the Portal Gun.

The Portal Gun can be fired at the moon. If so, the other end of the portal will suck in all blocks, entities, mobs and players within an 8-block sphere centered on the portal. Anything sucked through is destroyed and/or killed. However, flowers do not seem to be affected by this unless the block they are planted on is sucked in.

On the day after your date of birth (as you indicated when you registered your minecraft account), a cake with a torch (candle) on it will appear in front of all portals, however they are only graphically there, they cannot be interacted with, and you move right through them.

When holding a portal gun and pressing the middle mouse button, it will zoom in. This works with all portal guns.

Rarely, a Portal Gun may be found in Dungeon chests.

There are a number of variants of the Portal Gun. Each needs to be crafted using the basic Portal Gun.

Any Portal Gun variant may be found in Dungeon chests.

A Bacon Gun's apertures are unique to that Bacon Gun, and cannot be altered by using any other Portal Gun (even another Bacon Gun). This makes it very useful for multiplayer.

The Bacon Gun's aperture colors can be customised by editing the Portal Gun mod's settings file.

A Potato Gun fires a mauve and a light green aperture. A Potato gun's apertures are unique to that Potato Gun, and cannot be altered by using any other Portal Gun (even another Potato Gun)

The Potato Gun's aperture colors can be customised by editing the Portal Gun mod's settings file.

The Single Colored Portal Gun can only fire one aperture rather than two. It is produced by smelting a default Portal Gun in any furnace; the color aperture it will fire is the color of the Portal Gun when it was smelted.

Two Single Colored Portal Guns of different colors can be crafted together to create a default Portal Gun (which fires both apertures).

This page was last modified on 3 October 2019, at 18:42.
Content is available under Creative Commons BY-NC-SA 3.0 unless otherwise noted.