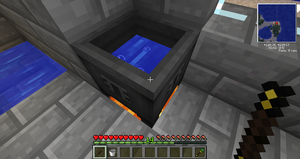 The Crucible is one of the most basic items in Thaumcraft 3.  It is used to create basic Thaumcraft items as well as to send Aspects to an Infusion Altar.  It is created simply by placing a vanilla cauldron and using a Casting Wand on it.  To use it, however, it requires Lava or fire underneath and to be filled up with a bucket of water.  It will take a few seconds for the water to boil after a fire is made or lava is placed underneath.  When the water starts to bubble, it is ready to use. Crucibles may also be filled using Thermal Expansion's Liquiducts connected to the sides.

To craft the crucible, you must simply use your wand on a cauldron placed in the world.

The crucible is an important tool for any thaumaturge. It allows him/her to render physical objects into their component Essentia and recombine it again as he/she wishes.

The crucible needs to be placed over a source of constant heat (such as small pool of lava or a burning flame) and filled with water. Once the water starts boiling you simply throw any item you wish to break down into the crucible and they will be broken down into their component Essentia. You can then use a wand on the crucible and if you got the ratio and amount of Essentia right you might be able to craft something.

Any leftover Essentia is simply spilled into the local aura where it forms Flux. If you sneak while clicking with a wand, you will not attempt to craft something and directly spill the Essentia into the aura. This may seem counterproductive... for now.

However, do keep in mind that if you throw in Rotten Flesh or Brains into the Crucible while making Magic Tallow, you risk causing a Giant Angry Zombie to appear, which can kill you in 3 hits while wearing Iron Armor. It is unknown if spilling the leftover Essentia will also cause this to happen.

If you are planning on experimenting with the crucible it is a good idea to keep Scribing Tools and paper handy in case you discover something.

Water can automatically be filled with the use of a Fluid Pipe or Liquiduct. This can be very convenient as you won't need to fill it with a Water Bucket if you are planning to use the Crucible a lot.

Activating a Deployer with a Wand in it facing the Crucible will consume the items thrown in it, consume the required Vis from the Wand and cause the Essentia to be released. However it doesn't seem to yield any Item. This may be due to the Deployer not being seen as a player. Another problem is that the Wand will not be charged while in the Deployer, and there's no known way to automatically pump the Wand into a block that will charge it.

A Wood Golem can pick up items that are yielded and put it into its given chest.

This page was last modified on 19 May 2016, at 14:20.
Content is available under Creative Commons BY-NC-SA 3.0 unless otherwise noted.