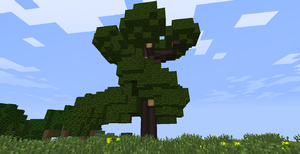 A Greatwood Tree found in the wild.

Greatwood Trees are randomly-generated trees from the Thaumcraft 3 mod. They are very large; they can span more than 30 blocks tall. They usually only generate in areas with high Vis. They are a source of Greatwood Logs and Greatwood Saplings.

Despite having a 2x2 trunk, they only need one sapling and will grow as long the blocks South, East and Southeast aren't obstructed.

Since it often drops more than one sapling upon cutting it down, it can be farmed like most other trees. They can be used as a fast resource of magic Aspects if there is no chiseled sandstone available, but mind the Flux created by wasting the wood Aspects.

Occasionally, Greatwood trees will generate with a Cave Spider Spawner and Chest spawned directly below the base of the trunk. These trees are identifiable by the cobwebs that generate throughout the canopy.

This page was last modified on 19 May 2016, at 15:48.
Content is available under Creative Commons BY-NC-SA 3.0 unless otherwise noted.