The Soul Shards mod allows you to create a Soul Shard that absorbs the souls of monsters you kill to be inserted into a Soul Cage later. This Soul Cage is a special block that can spawn the type of mob your Soul Shard was absorbing, usually at much better rates than a vanilla monster spawner.

This mod's cages can spawn monsters normally unavailable with vanilla spawners. In addition, higher tier shards can spawn mobs regardless of the light level, and can react to a redstone signal.

The soul of most vanilla mobs, passive or hostile, can be stored in shards. This does not include bosses, like the Wither Boss, nor does it include villiagers, iron golems, snow golems, or squid. This does, however, include Angry Zombies.

The Soul Forge is a special block that corrupts metals and diamonds when fueled by Corrupted Essence - a necessary process in the creation of a Soul Shard. 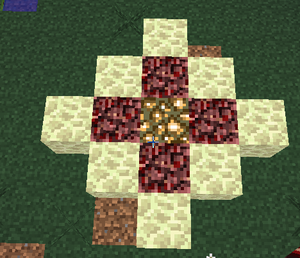 The Soul Forge (corrupted essence, corrupted Ingots, vile swords) no longer exists and the soul stealer enchantment can simply be gotten on any weapon/book with enchanting.

There are currently two methods to gather these souls: Hunting the mobs or destroying a vanilla spawner to absorb the souls within:

In order to charge your Soul Shard through this method, you must place the Soul Shard on your hotbar. Next, find the mob in which you want to "tie" the shard to and kill it. Your Soul Shard will now be linked to that mob type and will only gain charges by killing that mob. For example, if you want an Enderman Soul Shard, your next kill after placing the Soul Shard on your hotbar has to be an Enderman. Souls of mobs that have been added through a mod cannot be captured. Killing mobs from a Soul Cage mob spawner WILL NOT generate soul charges. However, mobs spawned from vanilla mob spawners will charge the Soul Shard, so it may be wise to build a grinder.

Slimes souls are particularly easy to farm. Smaller slimes that spawn when killing bigger slimes provide souls, even if the big slime was spawned by a Soul Cage.

Right-clicking on a vanilla mob spawner with a Soul Shard in your hand will destroy the spawner and add 200 souls to the shard. Note that the shard must already have at least one of the mob's soul inside for you to be able to right click a spawner.

Although mobs generated from soul shards do not have a soul, mobs generated in MFR auto-spawners do, making this a very efficient way to quickly obtain souls at the cost of Mob Essence and power. You still have to deal the killing blow yourself, obviously.

Due to a bug in Forge, prior to 1.5, Soul Shards of different types could be combined at the Anvil. Doing so would transfer the souls in the first slot to the shard in the second slot, plus the usual repair bonus. This exploit allowed you to convert easy-to-collect souls like cave spider spawners into hard-to-collect souls like Ghasts, avoiding the balancing system of the Soul Shards mod. This has been fixed in 1.5.2

Once you have the desired tier mob spawner, you next craft a Soul Cage. Place the Soul Cage in the world and then right-click your Soul Shard onto the cage. Attempting to insert an inappropriate Soul Shard (such as a Tier 0 Endermen Shard) will do nothing. If you mine up the Soul Cage, you will receive the Soul Shard back, as well as the Soul Cage.

In older versions of the mod was a bug that, when breaking the cage, the Soul Shard was rounded down to the nearest power of two. For example, if a soul shard with 367 souls was inserted inside a Soul Cage (Tier 3), the Soul Cage, when broken, would yield a shard with 256 souls, also Tier 3; however, 111 souls would have been lost due to rounding. The same occurred with all varieties of Soul Shards, including Tier 5, although with Tier 5 it does not matter as tier 5 is the highest tier. (In 1.5.2 it's not possible to have a Soul Shard with more souls loaded then 1024)

Mobs from the Soul Cage will spawn in mid-air next to it if you wish to make a fall damage trap.

This page was last modified on 27 September 2017, at 21:28.
Content is available under Creative Commons BY-NC-SA 3.0 unless otherwise noted.