A Soul Shard is a crystal that stores the souls of enemies that you have killed. It comes from the Soul Shards mod.

To use a Soul Shard, it must be on your hotbar. The first enemy you kill will change the Soul Shard to only collect souls of that type. It can be used in conjunction with a Soul Cage to create a mob spawner.  Killing mobs from a Soul Cage mob spawner WILL NOT generate soul charges, and neither will their bred offspring.

In order to create a Soul Shard, you first need to craft a Soul Forge. After creating a Soul Forge, place a diamond in the top slot and place 8 Corrupted Essence into the fuel slot. After about 11 minutes, 3 Soul Shards will be produced.

In order to create a Soul Shard in this version of the mod one needs to activate an ingame structure with a diamond. The structure is as follows 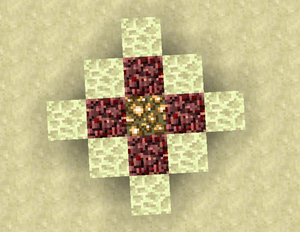 Simply right click a diamond on the center of the structure (the glowstone). The diamond is replaced with a soul shard, and the glowstone and netherrack of the altar are replaced with end stone, meaning you need to reconstruct it again for the next soul shard.

To use the Soul Shard you must first find the mob you wish to bind to the soul shard. Once one of this type of mob has been killed with a blank soul shard in the hotbar, it will specialise into that type of shard.

However, rather than simply just having to kill this many mobs to upgrade, if this mob has a spawner that occurs in the world (i.e. zombie, skeleton, spider, cave spider, blaze, silverfish), you can right-click on a spawner with a specialized (tier 0) soul shard to instantly add 200 kills to the shard. Upon doing this the spawner is destroyed and drops no experience. This means that if 5 spawners of the desired mob are found, only 24 extra kills are needed to make a tier 5 shard, which would probably already have been made in reaching the spawners. Also note that Skeleton spawners can also be used to fill up a Wither Skeleton Soul Shard.

Finally, to activate the shard, it simply needs to be placed inside of a Soul Cage by right clicking. Further details on how each level of spawner works, and so which would be best for a purpose can be found below.

Prior to 1.5.2, due to a bug in Forge, Soul Shards of different types could be combined at the Anvil. Doing so would transfer the souls in the first slot to the shard in the second slot, plus the usual repair bonus. This exploit allowed you to convert easy-to-collect souls like cave spider spawners into hard-to-collect souls like Ghasts, avoiding the balancing system of the Soul Shards mod. As of 1.5.2, soul shards cannot be combined on an anvil anymore.

The soul shard begins at tier 0, and increases in tier after a number of kills of the bound mob, up to a maximum of tier 5 (the amount of kills required is based on the powers of 2, starting with 2^6 for the first tier and doubling each time). Note that kills are cumulative. Each tier, the soul shard becomes more effective at spawning mobs when placed in a Soul Cage. The specific benefits and levels required are as follows:

This page was last modified on 27 September 2017, at 20:00.
Content is available under Creative Commons BY-NC-SA 3.0 unless otherwise noted.