A mod made by rich1051414, Damage Indicators enables visual damage indicators. You see the health of the last mob your cursor hovers over. If a mob that you have come in contact with has moved over 20 blocks away from you, you will no longer see their damage indicator. This mod does not replace the default boss health feature though, so on mobs like the Ender Dragon and the Wither will have the Damage Indicators health bar along with the default Minecraft one that is placed in the top middle of the screen. To open the Damage Indicators menu, press the " . " key in game. 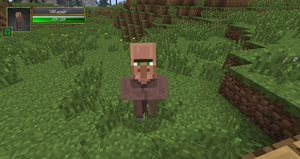 19 May - Creator announcement! Guys please welcome @StompTheBean to the FTB Partner Programme! Check out his videos over… https://t.co/l1ZqhEascj
17 May - Do you ever think your Minecraft character has an arty side, ready to splash the walls with some colour? Express t… https://t.co/5adb3dfBoN
15 May - Natural Decoration is a simplistic vanilla themed overhaul of nature itself. From flowers on cacti to mushrooms and… https://t.co/xYrJIZynz8
14 May - We have an exciting announcement for you guys.. We're partnered with @MBSTRS 🎉 We're very excited to work with t… https://t.co/qpYZbaZMSj
13 May - RT @Direwolf20: Official Announcement: The @FTB_Team has released the Direwolf20 pack for version 1.18.2 The first episode of my let’s p…

This page was last modified on 21 May 2015, at 00:28.
Content is available under Creative Commons BY-NC-SA 3.0 unless otherwise noted.