The MFFS Defence Station is a machine from the Modular Forcefield System mod. It allows control over who can enter an area, what items they are and are not allowed to bring into the area, and can kill players and mobs in the area. 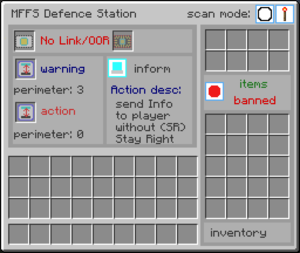 GUI of a MFFS Defence Station

To work, the MFFS Defence Station must be linked to MFFS Capacitor and MFFS Security Station and be switched on either by redstone signal or MFFS MultiTool (a button at the top right corner of the GUI controls the mode. The default is redstone control). When on, dots on the Defence Station are red.

In default state, Defence Station will not perform any actions. It will only warn anyone who comes closer than 3 blocks.

To perform an action, its action perimeter needs to be increased with the action button:

. The warning perimeter can be increased the same way.

The Defence Station can be set to scan either a spherical or cubical area using the Scan Mode button at the top right corner of the GUI.

Sends a message to players who don't have the Stay in Area right and are inside the action perimeter, to go away.

Kills players who don't have Stay in Area right and stores their items inside of the defense station and any adjacent storage.

Scans players' inventory and compares to a set of items placed in the top-right corner of the GUI. Search ignores any player with the "Allow Have All Items" right. For other players, search has two modes:

This page was last modified on 27 January 2017, at 03:31.
Content is available under Creative Commons BY-NC-SA 3.0 unless otherwise noted.