The Wind Turbine extracts energy from the air in RotaryCraft.

The wind turbine uses wind to generate rotational power. Due to the low density of air, it does not generate much torque (only 4 Nm), but its design allows it to rotate at the rather rapid speed of 1024 rad/s, producing a total of 4.096kW at max efficiency. Note that the efficiency of this engine is only maximized when it is high up and out in the open. Objects and blocks can obstruct the blades of this engine. 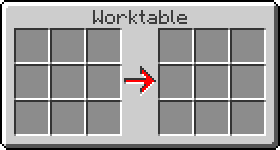 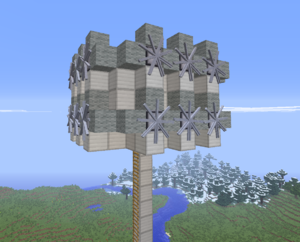 A RotaryCraft wind farm at about level 128.

For best results, place in an open area with 16 blocks of space in front of it, and somewhere you won't walk into the blades (deals 1/2 Heart per hit, regardless of rotation speed.) Optimum efficiency is obtained at or about level 128 with at least 16 blocks of open air in front. They are almost worthless at sea level (about 64) and will not work below that level. Even in high-altitude generated structures, Wind Turbines will not work. 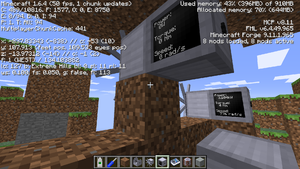 The turbine in the background is just outside the overhang.

The Wind Turbine can only directly power a few small machines, like the Pump, or Fluid Crystalizer. It is also a challenge to transport the power without deliberately locating your base on a mountain top. ElectriCraft, a sister mod for RotaryCraft, can be used to store the power in a battery for use later which cuts the need for large towers of shafts.

15 Oct - It's afternoon! Curiosity time, what's your favourite mod right now and why?
14 Oct - Good afternoon everyone! How's peoples day going? This account is going to be more active now on :)) - Max
14 Oct - Check out an all new development stream an expert mode for the recently released OceanBlock. https://t.co/s7XrTYmYZl
13 Oct - RT @CreeperHost: 🎁 IT'S OUR 10TH BIRTHDAY! 🎉 We're celebrating with a big giveaway and sale with up to 65% off! Take a look at our giveaw…
6 Oct - Recently a mass breach of data has occurred from Twitch. The source (Not the database) of the FTB Forums was includ… https://t.co/kzuNVUARbX

This page was last modified on 30 May 2018, at 20:27.
Content is available under Creative Commons BY-NC-SA 3.0 unless otherwise noted.