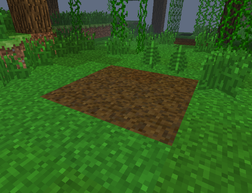 Quicksand is a non-vanilla block that occurs naturally on the surface of the world in Mini Jungle biomes in 3x3x3 chunks. Its function is similar to Cobweb in that it slows the player and any mobs down. However, quicksand slows things down much more than Cobweb. Torches, paintings and etc. are able to be placed on it and since it is a block, the player/mob will take suffocation damage if they sink far enough into quicksand that is at least 2 blocks high or at head level, although a full hazmat suit will prevent any damage from being taken. Quicksand can easily be mined by using any shovel. However, as in any situation when your feet are not planted on the ground (flying, swimming, etc.), you will dig much slower when sinking, which can make it quite a harrowing experience - It may be easier to dig out the dirt around the pit instead.

Quicksand can be created also in Sludge Boiler using Sludge (MineFactory Reloaded) produced from Harvester as side effect of harvesting.But there is 5% chance of drop.

This page was last modified on 24 June 2015, at 20:34.
Content is available under Creative Commons BY-NC-SA 3.0 unless otherwise noted.